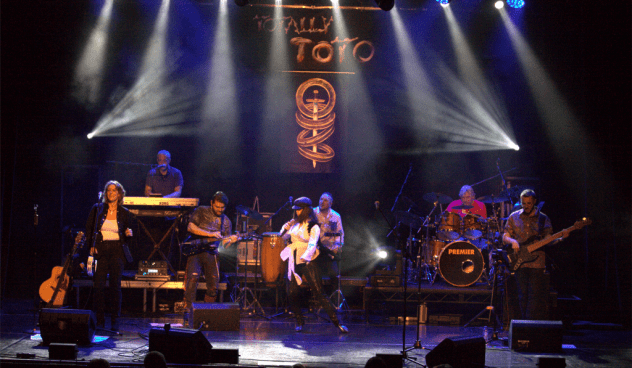 Totally Toto comes to you from the same team that brought the popular And Finally…Phil Collins show. Twice voted as the UK’s number 1 tribute band by the Agents Association of Great Britain, it just so happens that these talented musicians are all massive Toto fans too!

Toto are currently undertaking their 40th Anniversary Tour, so it seemed fitting for this new production to be launched in this special celebratory year.

They are highly regarded by music fans all over the world – especially by musicians – and are admired for their numerous chart including Africa, Hold The Line, and Rosanna plus many more.

Their music is highly complex, but at the same it’s time pleasing to the ear and complemented by inspirational lyrics.

Forty years after they launched, with 21 Album releases to date, and half a billion record sales to their credit, Toto still packs arenas around the globe and show no signs of relenting. In fact, they continue to amaze and inspire a whole new generation of music lovers and musicians.

Their live shows are superb, accurate to a fault, ensuring spot-on performance as well as powerful rock delivery with truly awesome lighting and visual spectacle.

To attempt to recreate such a high standard of performance is no mean feat and quite a challenge. However the ‘And Finally’ musicians are regarded as some of the best in their field and this labour of love has created a very special show paying homage to one of the world’s most accomplished bands. The show is fronted by the amazing Chloe West, from Australia, on lead vocals, her musical ability tackles the complex and challenging melodies supported by great backing vocals and a couple of lead vocals from Kev Armstrong on keyboards.

All of Toto’s greatest hits are included in this 100-minute production. In addition to the obvious hits there are other great tracks from many of their albums such as Goodbye Eleanor, Childs Anthem, White Sister, Home Of the Brave, Georgy Porgy and a couple of their cover arrangements from the Through The Looking Glass Album.

The show is a must for Toto fans as well as all of those who enjoy Classic American rock from its 1970s-80s heydays. If you’re not lucky enough to get a ticket to Toto’s 2019 tour, check out Totally Toto for a fantastic homage to this classic band.